Walk of the best bars of the capital with Gastroenterol

09.23.2019
Remember, with the Remark: "... In a heated Abrate at the last moment add the crushed ice mixed with plum liqueur, pre-loose cannons ginger beer, orange vodka and a dash of lemon juice, then add cream and immediately two drops of curaçao. In the glass crystallization begins; about three minutes you can see how the layers differ at the edges. Gradually, the movement stops and radiant streaks appear, extending from the center to the edges. In the form of honeycomb filled with honey, hang in the glass of the saturated crystals. Then add the fresh pineapple juice, pour the mixture in a round crystal bottle, hermetically sealed it, heated and again cooled in a bath for hours before the temperature of ice. Seven nights with a full moon hanging in the moonlight, and then stored in the dark. At it never should fall the rays of the sun. A year later, the bottle of pop.
She is the main essence cocktail doslidnogo hours. But it adds another eleven other ingredients, which I will not say anything.
... The cocktail is varied as life itself. He is a diamond, the many facets which sparkle with thousands of colors; but still it is the only diamond"...

Bearing in mind that a good bar - always ten o'clock and that the person's attitude to alcohol is a projection of his relationship to the world, a dozen of our guides yesterday had the pleasure to become parties to gastroplasty to find out what it is - bar culture capital)
Because we only work with the best of the best, then Gastropoda of the evening was Alexey Volkov - GASTROEXPO, which knows where in Kiev it is tasty!
He chose five institutions - different conceptually, but each is interesting in its own way.
The evening began in the Bar Rhodywhere in the menu you can find rare to the bars, the Moonshine, prepared according to old recipes. And if your tourists want something orginalne and authentic - to vedit them here!
Continuing the theme of autumn drinks was a visit to a restaurant Frame, where this fall, prepare warm cocktails. It is difficult to choose between the pear with rum and egnigem coconut milk!
Next was Chuchvara and her wizard - Sergey Cadaver, who treated the guests to the fact that he cooks, he drinks and likes: chacha classic, apricot, coffee, tarragon, honey, grapefruit, prunes ... Of the eight proposed options every found your.
William Faulkner once said, "Civilization begins with distillation". And he was right, because chacha here is not so much and not only about spirits. It's more about warm chilly night, warm to sit and mentally talk to ❤it's amazing
And then we went to your favorite and atmospheric Barmandictat - the realm of alcohol, the right sounds, the longest in Kiev bar. Local bartenders almost 100% guessing with cocktails for our guests, ask in advance about what they like or what ingredients they would like to feel.
And then it was a creation of his own already which has a classic digestif B-52 in the bar COMPOSITION.
As a summing up of the evening - awarding of certificates guides Guild Guides Guild each participant astropogon and selected legendary cocktail "Green Mexican", which is in all bar the maps of the world, and who hails ... from Kiev! 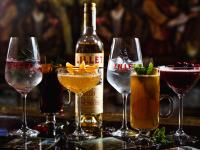 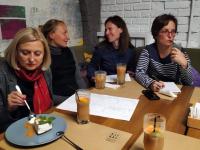 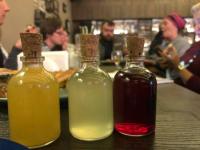 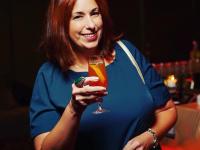 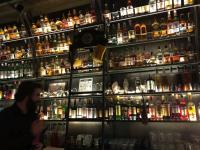 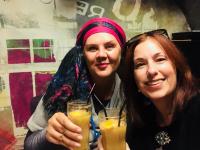 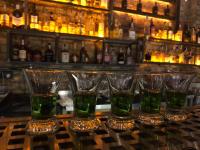 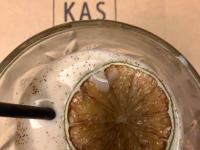 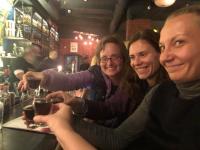 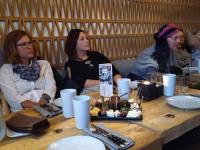 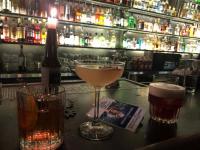 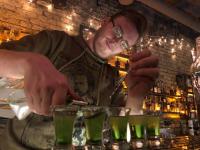 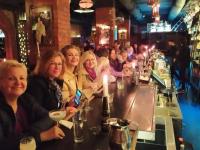 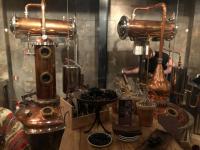 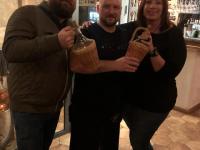 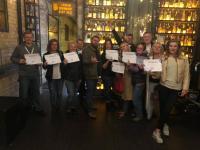 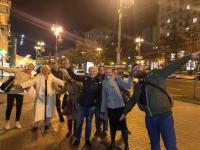